Would you put your life savings into this asset? 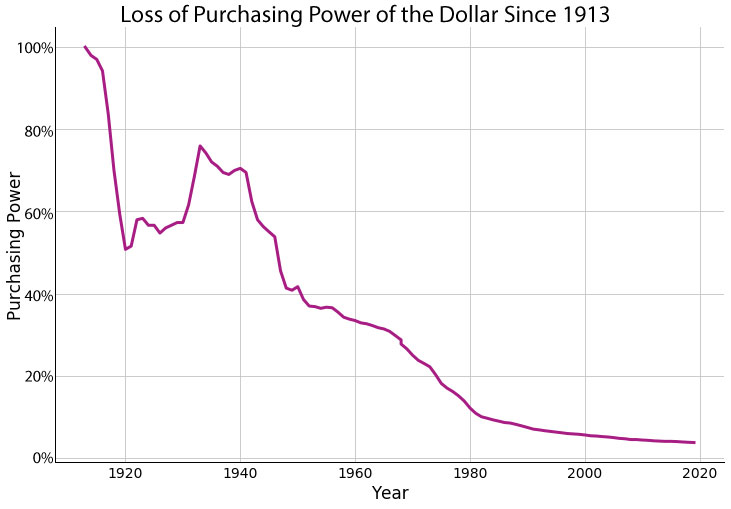 If you’re an American, your life savings probably are overwhelmingly in this asset – the US dollar. Since 1913 – not coincidentally, the year the Federal Reserve came into existence – the dollar has lost about 99% of its value relative to gold.

Despite this dismal record as a store of value, the world has placed so much faith in the greenback that it functions as a global “reserve currency.” That status came about as a result of a 1944 conference in Bretton Woods, New Hampshire. At the meeting, a group of finance ministers and other high-ranking officials from 44 countries declared that henceforth, the dollar would be “good as gold.”

The Bretton Woods conferees agreed that nations could no longer demand gold from their trading partners to settle debts. Henceforth, central banks could exchange their dollars for gold from the US Treasury at a fixed price of $35 per ounce.

Unfortunately for the rest of the world, Uncle Sam couldn’t abide by this deal. By the 1960s, central banks accumulated more and more dollars and started to demand that the Treasury redeem them for gold at $35 per ounce. To avoid depletion of US gold reserves, in 1971, President Nixon suspended the dollar’s convertibility into gold.

Ironically, Nixon’s initiative half a century ago actually entrenched the dollar’s status. Since central banks could no longer exchange dollars for gold, they were forced to accumulate dollars. And because so many global transactions were settled in dollars, businesses in every country needed to exchange their local currencies into dollars to pay debts and transact business.

Today, about 59% of global central bank currency reserves are held in dollars. That number has slowly declined in recent years; it was 66% at the end of 2015; 70% in 2000. But one-third of global GDP still comes from countries that have adopted the dollar as either an official or parallel currency. And nearly 90 countries keep the dollar in a tight trading range with their local currency.

We’ve previously discussed some of the benefits having reserve currency has to the United States. Chief among them is the ability to run enormous government deficits. After all, if you head up a central bank and local merchants are clamoring for dollars, you have to keep them on hand. That’s true even when Uncle Sam creates several trillion of them out of thin air each year.

Another benefit of reserve currency status is that it gives the US government a hammer to hold over the heads of its adversaries. The hammer comes in the form of US domination of the international payments settlement system called SWIFT – the Society for Worldwide Interbank Financial Telecommunication. This organization offers over 11,000 financial institutions in more than 200 countries a network enabling them to send and receive payment orders in a secure, standardized format.

Even though SWIFT is headquartered in Belgium, Uncle Sam has a great deal of influence over it. A whisper from Washington, D.C. is all that’s needed to cut a bank – or an entire country – out of the global dollar clearing network.

The threat is real, although not generally acknowledged. But in 2018, then-Treasury Secretary Steven Mnuchin warned China it would be excluded from SWIFT if it didn’t enforce United Nations sanctions against North Korea. And last June, the head of the Economic Cooperation Department in Russia’s Foreign Ministry, Dmitry Birichevsky, warned of threats, “primarily from the United States, to disconnect Russia from the SWIFT system.”

Naturally, Uncle Sam denies that it uses the dollar as a weapon. But it should come as little surprise that the targets of US sanctions and threats to deny entire countries of the global dollar-clearing system, aren’t especially pleased about the current state of affairs. Nor should it shock anyone that they’re taking steps to bypass SWIFT and its global dollar-clearing system.

For instance, since 2017, Russia and China have been settling financial obligations to one another in their respective local currencies. Since then, the dollar’s share of payments of Russian exports to China has plummeted from nearly 90% to less than one-third. In 2019, Russia introduced its own clearing network, SPFS, or System for Transfer of Financial Messages. But it’s tiny compared to SWIFT, with only 23 banks connected to it as of the end of 2020.

But China – now the world’s second-largest economy – stands to lose the most from dollar hegemony. And it’s doing all it can to get out from under it. One important initiative in this regard is a cryptocurrency linked to the country’s national currency, the yuan. Among other uses, the People’s Bank of China is testing the digital yuan for use in cross-border payments in concert with the central banks of Hong Kong, Thailand, and the United Arab Emirates.

These efforts are likely to continue eroding the dollar’s reserve currency dominance. But they’re unlikely to dethrone it very quickly.

For instance, China would love for its digital yuan to become the new global reserve currency but that’s highly unlikely. The yuan’s share of global currency reserves comes to only 2.45%. What’s more, China maintains strict exchange controls, greatly complicating the task of moving funds in or (especially) out of China. That’s hardly a reassuring underpinning for reserve currency status.

So despite the slow erosion of the dollar’s reserve currency status, it’s not likely to end anytime soon. But as seen from the chart at the beginning of this article, the greenback is hardly a reliable store of value. What’s more, President Biden is being urged to take steps to weaken it further.

If not dollars, what currency should you store your savings in? Some of the talking heads in financial circles say it should be bitcoin or other cryptocurrencies. But while we’re awed by their price performance over the last few years, we’re not yet convinced bitcoin is the ultimate store of value.

After all, while cryptos are an emerging asset class, they’ve only existed for about a decade. We don’t know how they’ll over the long term.

The asset we do like is gold. Now, we understand gold isn’t currently a very sexy asset, if only because its performance in the last 18 months has been underwhelming, to put it mildly. But its long-term track record for protecting wealth is unmatched. An ounce of gold was worth $20.67 in 1913, when the dollar began its century-long collapse in value. Today, it’s worth $1,763.30.

It’s anyone’s guess if the continuing efforts to dethrone the dollar’s reserve currency status will be successful, and when. But one thing is for sure. Eventually, the dollar is fated to join the long list of fiat currencies that have been debased out of existence. On its way out, you’ll see even higher inflation, bail-ins, and exchange controls.

It’s only a matter of time. Make sure you’re ready when it comes.