Inflation IS Transitory, but…

Last Friday, the Bureau of Labor Statistics (BLS) announced that the Consumer Price Index (CPI-U) jumped 0.8% in November from October; an annualized increase of 9.6%. In the last 12 months, inflation has risen 6.8%. It’s the largest 12-month increase since 1982.

Those are the official numbers, but as we’ve mentioned before, if inflation were measured the same way it was in 1980, the CPI would show an annualized rate of around 15%. Here’s a chart that in our view, provides a more accurate picture of inflation, courtesy of John Williams’ Shadowstats service. 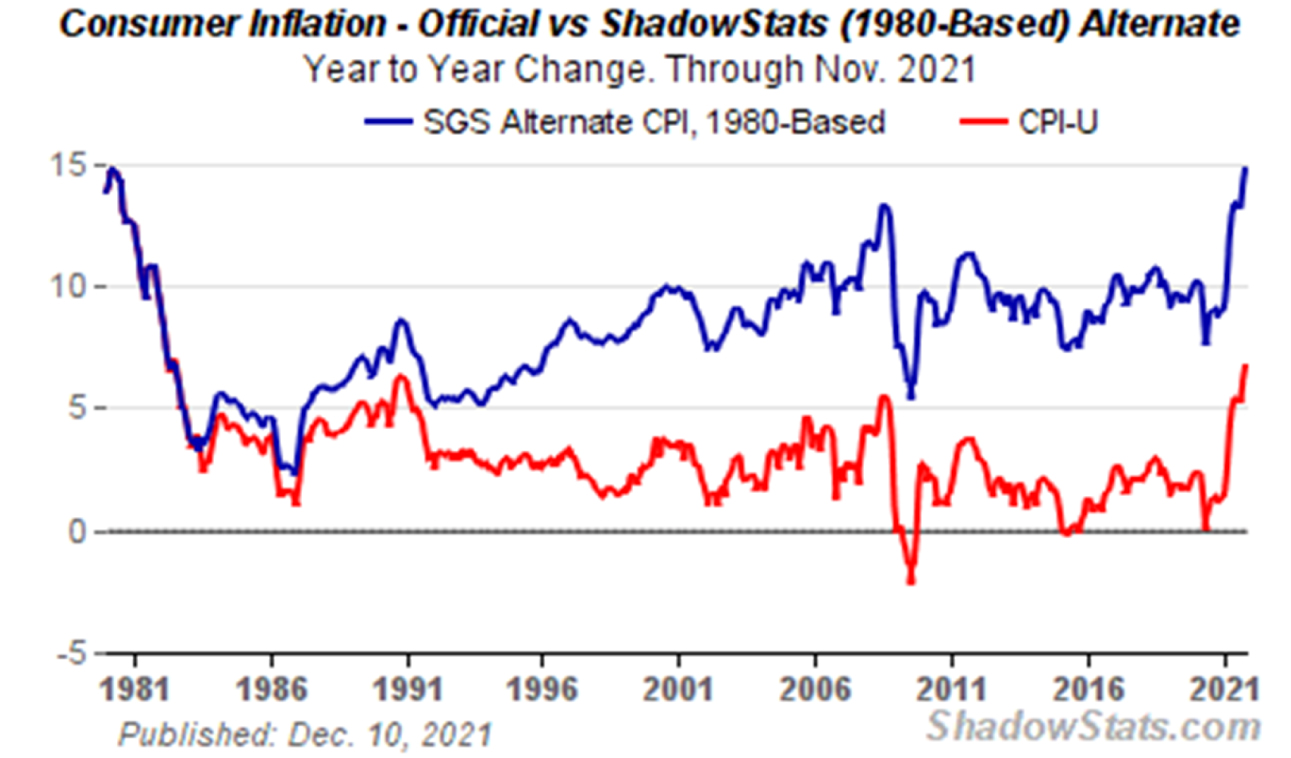 In the real world, inflation would be tracked by measuring the cost of buying a fixed basket of goods and services, roughly approximating the cost of maintaining a constant standard of living. And indeed, from the 1700s until around 1980, that’s how inflation was measured.

But beginning in the 1980s and accelerating through the 1990s, the BLS converted the CPI away from measuring the price changes in the fixed basket to changes in a basket where consumers could substitute lower-priced goods and services if higher-priced ones became too expensive. The theory was, in the words of former Federal Reserve Chairman Alan Greenspan, “you’ll switch to something cheaper—more hamburger will show up in your meals than steak.”

The BLS also introduced a concept called “hedonic adjustment.” This theory holds that as the quality of goods or services improve, their effective cost decreases, even if consumers have no opportunity to buy those goods or services at a lower price. Thus, according to the official CPI, a television that cost $1,000 in 1996 should now cost $22.

But when was the last time you saw a working television of any age you could actually buy for $22?

Another analyst we follow, Wolf Richter, offers the following chart, which tracks the actual prices of a Ford F-150 pickup truck and a Toyota Camry LE car versus the hedonically adjusted CPI for new vehicles. The result, to put it mildly, is eye-opening. 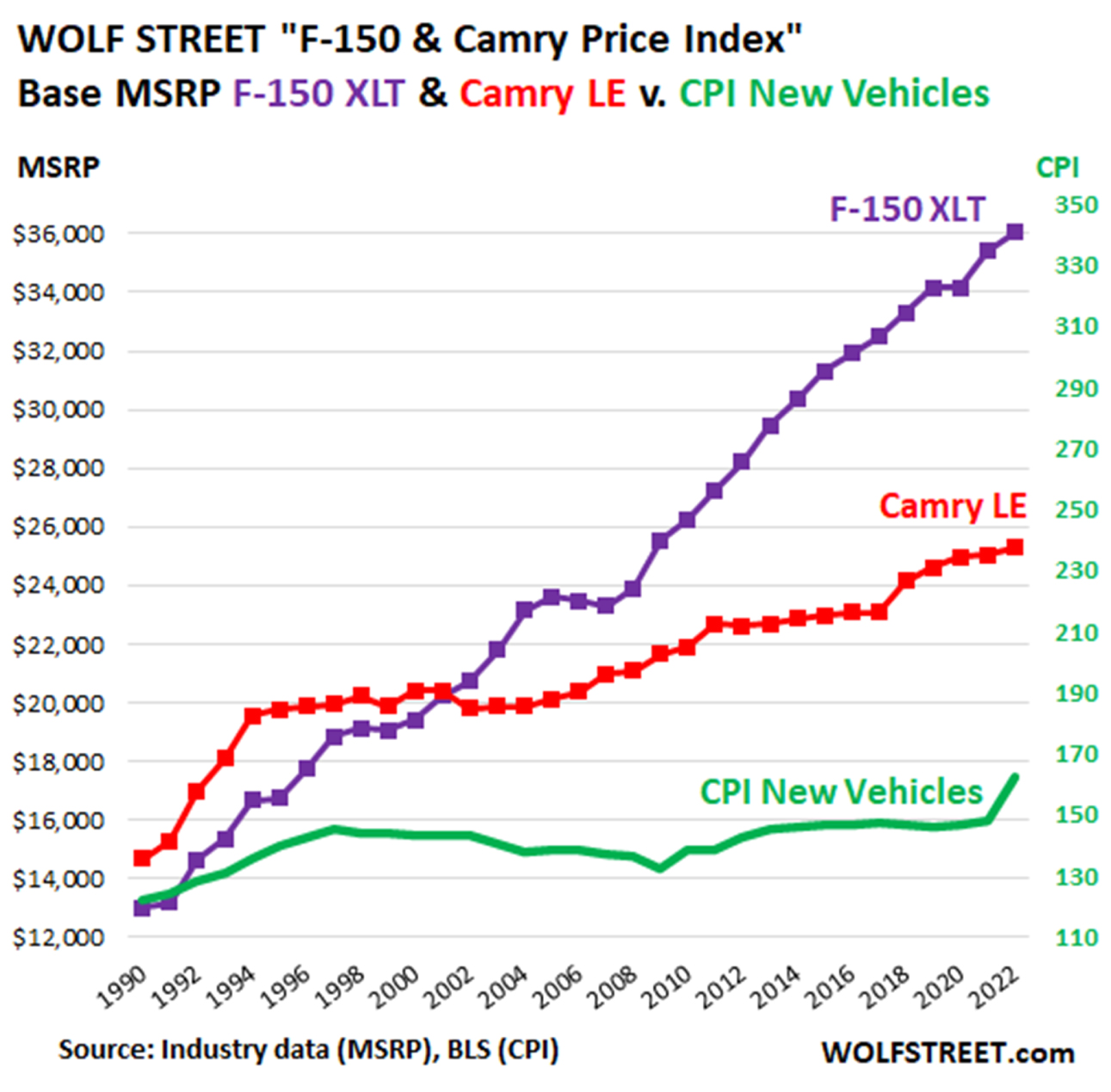 Only a few weeks ago, mainstream economists and the Federal Reserve were proclaiming this inflation wave would be transitory. The Biden administration still says it will be transitory, blaming supply chain disruptions caused by the COVID pandemic. Meanwhile, Senate Democrat Elizabeth Warren blames inflation on “greedy corporations.”

You might be surprised to read that we actually think that President Biden and Senator Warren are both partially right in their assessments, although for different reasons than you might think.

But over the next year, though, inflation won’t feel transitory. Our conclusion stems from the fact that producer prices are rising at an even faster pace; 11.8% to 27.8% annually, depending on how close products in the supply chain are to being offered to consumers. And again, these are hedonically adjusted prices.

That brings us back to Senator Warren’s statement that greedy corporations are responsible for inflation. They are, but so is everyone else. The reason is that there is a huge psychological component to inflation. One predictable result is hoarding: people are buying more “stuff” than they need today because they anticipate price increases tomorrow.

And businesses are happy to oblige. That’s why Proctor & Gamble was able to increase prices on baby products, adult diapers, and feminine-care brands last September; consumers are now conditioned to pay more. Thus, we can just as easily blame consumers for inflation because they’re willing to shell out more money for the products and services they need.

What’s more, you could justifiably conclude that greedy workers are the cause of inflation. As the US economy reopens after 2020’s COVID-related lockdowns, employers are facing an unprecedented shortage of available workers. And workers are taking advantage by leaving their current jobs in record numbers to nab higher-paying ones.

But in fact, neither businesses, consumers, nor workers are the primary drivers of inflation. Economists define inflation as an increase in the money supply. There are various ways of defining the money supply, some of them mind-bendingly technical. But a working definition for our purpose comes from the Mises Institute:

Thus, when the Federal Reserve creates trillions of dollars out of thin air and uses it to buy Treasury securities that it then places on its balance sheet, that action represents an increase in the money supply. So do the various bailout packages enacted by Congress over the last two years that have sent thousands of dollars to all but the wealthiest Americans.

An increase in the money supply results in more dollars being spent on stocks, goods, services, or whatever. And that sets price hikes in motion. The fact that politicians like Senator Warren ignore this reality doesn’t change the causal relationship between inflation and the money supply.

Inflation is, without a doubt, the most destructive economic malady that can befall a nation. Each year, the real value of the cash in your bank account is worth about 15% less than it was the year before. Every American must increase their income by 15% annually or generate a consistent 15% or higher return on their savings just to keep up.

And that’s before taxes—if you pay 40% of your income in taxes, the breakeven number jumps to more than 23% annually. No conventional investment can consistently offer such returns. And no business can afford to raise its prices 23% annually and hope to keep its customers.

It’s a vicious cycle, but as President Biden has predicted, it will be transitory. Eventually, we’ll reach a tipping point where inflation leads to an economic collapse not unlike what Germany experienced in the 1920s. And as we know, that in turn led to the Great Depression—an enormous and extended deflationary period.

There are no easy answers to the inflation dilemma. We remain advocates of gold and stockpiling real goods in the expectation that prices will rise in the months and years ahead. We’re also still fans of the Permanent Portfolio strategy, devised by our colleague, the late Harry Browne, more than 50 years ago.

Finally, we’ve long suggested that you place some of your assets “offshore,” both for the sake of investment diversification, and to keep them out of the easy reach of Big Brother. To that end, we invite you to take a look at our new Global Stock Analyst.