Humpty Dumpty sat on a wall,

Humpty Dumpty had a great fall.

Humpty Dumpty is often portrayed as an anthropomorphic egg. If you were to drop a raw egg and let gravity take its course, putting the pieces together again would be virtually impossible. Even if you managed to glue the shell in place and place the yolk back inside, the structure would be highly unstable and prone to breakage.

Humpty Dumpty is an apt analogy for what the US and the rest of the world faces in the weeks, months, and years ahead as we transition into the post-COVID-19 era. While stock prices have stabilized for the moment (no doubt reacting to the $2 trillion bailout recently signed into law by President Trump), don’t be fooled. We’re only a few steps in on the path to economic catastrophe; what I’ve dubbed the “Great Unravelling.”

The most obvious sign of the Great Unravelling is soaring unemployment. On April 2, the Department of Labor announced that nearly 6.7 million people had filed initial unemployment claims for the week ending March 28. That’s 10 times worse than the worst week of the 2007 to 2009 recession. The previous week, ending March 21, when over 3.2 million new claims were filed, was four times higher than the previous record.

Here’s a chart of the long-term trend from Wolfstreet.com. 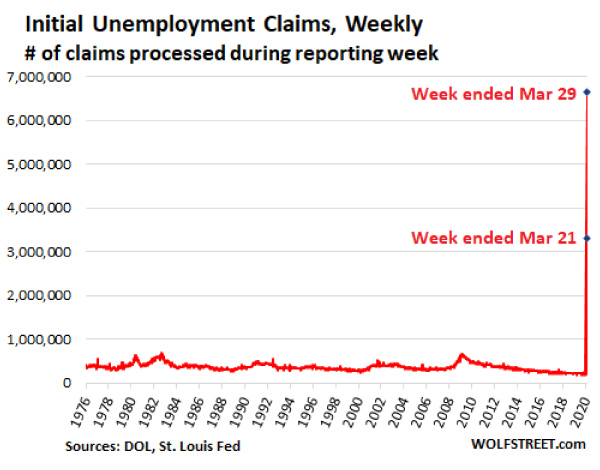 And we’re just getting started. James Bullard, the president of the Federal Reserve Bank of St. Louis, suggests the unemployment rate may hit 30% for the second quarter of this year, with GDP dropping a stunning 50%. By comparison, in 1933 – considered the low point of the Great Depression – about 25% of American workers were unemployed. Even professionals like doctors and lawyers saw their incomes drop by half or more.

The mainstream media seems to consider the sudden economic downturn we’re now experiencing a temporary issue. But every day that the economy remains paralyzed by the lockdowns imposed to contain the pandemic will make it that much harder to put Humpty-Dumpty back together. As the effects of the lockdown cascade through the economy, much of the damage will be irreversible.

And once the lockdowns end, it’s not as if everything will go back to normal. Consider the oil industry, for instance.

The demand for oil has plummeted nearly 20% in recent weeks, complicated by a price war between Saudi Arabia and Russia. That translates into a surplus approaching 20 million barrels per day. Jeffrey Currie, Goldman Sachs’ chief commodity strategist, says that given the current production glut, oil prices may actually decline below zero because there’s nowhere to store the excess. As he puts it, “given the cost of shutting down a well, a producer would be willing to pay someone to dispose of a barrel, implying negative pricing in landlocked areas.”

Collapsing oil prices, in turn, are putting unprecedented pressure on America’s undercapitalized banks. Capital One is a case in point. Last Friday, the Commodity Futures Trading Commission (CFTC) announced that it would suspend the requirement for an unnamed US bank to register as a “Major Swap Participant” in the energy swaps market. Essentially, the bank – which Reuters reported was Capital One – made a leveraged bet that oil prices wouldn’t plunge as low as they already have.

CFTC intervention prevented Capital One from being presented with an enormous margin call that could have led to its bankruptcy. That’s especially worrisome since energy loans account for only 1.4% of the bank’s loan portfolio. But while the CFTC’s rescue left Capital One in business, will the bank survive if energy prices don’t turn around or even go negative once oil storage space runs out?

Meanwhile, the Federal Deposit Insurance Corporation (FDIC) recently released this almost surrealistic video, accompanied by soothing music, to reassure Americans that the safest place to keep your money is in an FDIC-insured bank. Perhaps that reassured some people, but it reminded me that the FDIC’s insurance fund only has a reserve ratio of 1.41%. For every $100 on deposit, the FDIC has $1.41 to back it.

The bottom line is that unless President Trump, along with most state governors, reverses course and allows businesses to reopen, the resulting downturn is likely to be as bad if not worse than the Great Depression. That seems very unlikely given recent pronouncements from the White House.

Debt defaults will put pressure on mutual funds, pensions, hedge funds, insurers and other firms that invest in corporate bonds. We can also expect a tidal wave of defaults on the $760 billion junk bond market.

Many economists are rightly concerned about the trillions of dollars the federal government is borrowing to cope with the crisis. But state, county, and local governments will otherwise be in truly dire straits. State and local tax revenues are already plummeting. Unlike Uncle Sam, these governmental entities can’t print money or create it out of thin air. Revenues from income taxes, sales taxes, and property taxes will evaporate, forcing instant austerity.

The more than 5,500 state and local government pension funds that are heavily invested in stocks will experience even steeper losses as the market falls further. Many of these plans are already experiencing a funding crisis.

When the quarantines end, you’ll emerge into a world you’ll find almost unrecognizable, with widespread shortages, spiked unemployment, and a much weaker economy. Tens of millions of Americans will permanently lose their jobs, and hundreds of thousands of businesses are likely to be driven into bankruptcy. And if you think homelessness is a crisis today, just wait until the unemployment rate hits 30%.

I’ve often been labeled an alarmist, but over the years, I’ve tried to inform the public (and certainly my readers) in measured and realistic tones. It’s not easy making these predictions. Nothing would give me more pleasure than being wrong about them.

But someone needs to be honest with America about what’s ahead of us. The Fed, the FDIC and the mainstream media talking heads don’t want you to worry about the economic impact of COVID-19. Instead, they want you to blithely keep your money in undercapitalized banks and carry on with the mindset of “business as usual.”

Don’t believe them. Keep in mind that starting in October 1929, over a period of less than three months, the value of stocks traded on the New York Stock Exchange fell 50%. By 1933, stock prices were nearly 90% lower than they were before the crash started. If you bought at the top of the market, you wouldn’t have broken even on your investment until 1954. Adjusted for inflation, you wouldn’t have broken even until 1958. Even in the much milder recession of 2008 and 2009, stock prices fell by over 50%.

What we’re facing in the months and years ahead is unprecedented. It will be a long, slow, and painful slog as we navigate the post-COVID-19 world. While it’s never a good idea to panic, the road ahead will require patience and courage.

CLICK FOR FREE COURSE How to Go Offshore in 2023