What Larry King and Prince Had in Common

Former legendary talk show host Larry King died last month at 87 years. At first glance, he might not appear to have much in common with pop star Prince, who died in 2016 – beyond both celebrities being household names and both having passed away in recent years.

But Larry King and Prince do share one other important attribute: they both died without nailing down a clear division of their assets to their beneficiaries.

Prince died without making a will or trust at all. In his home state of Minnesota, as with most others, complex rules determine who gets what if someone dies intestate (without a will).

Prince’s parents and grandparents are dead, as are two of his half-siblings. He was married and divorced twice and had one son, but that child died shortly after birth. So Prince’s estate will be divided between his sister Tyka and his living half-siblings.

That’s just the beginning of the saga. To complicate matters further, Tyka and one half-brother, Albert, signed over part of their respective rights to the estate to Primary Wave, a music publishing company, in exchange for cash up-front as court proceedings dragged on. But only a few hours after signing the agreement with Primary Wave, Albert died, complicating things even more.

Now the IRS has stepped in. Last month, the agency accused Comerica Bank, which is serving as the executor of Prince’s estate, of undervaluing the estate by 50%, or about $80 million. The IRS is demanding another $32.4 million in estate tax, including a $6.4 million accuracy-related penalty.

In the meantime, the surviving heirs are becoming increasingly desperate, having spent well over $10 million in legal fees so far, with no end in sight.

And now, there’s every indication Larry King’s family will face a similar ordeal, although for different reasons. King was married seven times and at the time of his death was in the final phase of divorce proceedings with his latest wife, Shawn King.

Larry and Shawn filed for divorce in August 2019. Only two months later, Larry prepared a secret handwritten will dividing his personal assets equally among his five children, and disinheriting Shawn entirely.

Here’s a screenshot of King’s will: 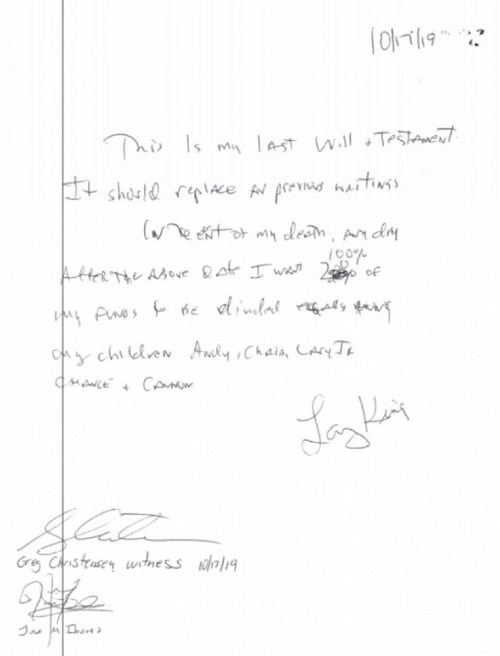 It gets even more interesting now, because two of the five children named in the will have since died.

King was better prepared than Prince, because only about $2 million of his estimated $144 million estate is subject to division under the will. The remainder of it is held in trusts that don’t currently appear to be at issue.

Nonetheless, $2 million is still a lot of money. Shawn thinks she should get it, but King’s son Larry, Jr. believes the money should be divided among the three remaining children. And naturally, they plan to fight it out in a California probate court – a very public setting. The proceedings will undoubtedly be attended by reporters and paparazzi, all seeking revealing or embarrassing content or photos to publish.

We have no idea who will win the contest. But one thing is certain: when it’s over, whoever gets the money will inherit a lot less than that $2 million once all the legal and court fees are paid.

In the 30 years we’ve been involved with wealth preservation, we’ve encountered a recurring belief in immortality among many clients. They don’t literally believe that they could live forever, though they often act as if they will.

That’s why, no matter how wealthy you are, you should have at the very least four basic estate planning documents prepared:

Another document we recommend to all of our clients is a living trust. The biggest benefit is that the assets in a living trust, or that are controlled under its provisions, need not go through probate. The trust works in conjunction with a document called a “pour-over will.” This is a will created with an additional provision stating that the property in your estate not already conveyed to your living trust is transferred to the trust at your death.

If you have an estate large enough to potentially be subject to estate tax, additional planning may be in order. That’s not an issue for most Americans, because the first $11.7 million of assets conveyed to the next generation are exempt from tax. But if President Biden succeeds in reducing that threshold to $3.5 million, as he’s promised to do, a lot more estates might be subject to this tax. (If you think you could be, contact us at service@nestmann.com. We have some strategies that can reduce or eliminate this burden completely.)

Estate planning isn’t rocket science. But it’s not something you should put off, either, if only to avoid the sort of squabbling we’ve seen surrounding Prince’s estate – and now Larry King’s.