The Government Is Lying to You About Inflation, Too

Do you remember the first time you realized the government was lying to you?

In my case, it happened in 1971, when I was 15. A Department of Defense employee named Daniel Ellsberg leaked a top-secret study of the US political and military involvement in Vietnam to The New York Times. What came to be known as the “Pentagon Papers” demonstrated that President Lyndon Johnson had “systematically lied, not only to the public but also to Congress.”

The big lie was that the justification to send more than 2.7 million Americans to Vietnam (where more than 58,000 died) was, in Johnson’s words, to ensure an "independent, non-Communist South Vietnam." But the real reason was "not to help a friend, but to contain China."

Even at 15, I was indignant. Couldn’t the American people be trusted with the truth? Certainly, President Johnson didn’t think so.

For letting Americans know the truth, federal prosecutors indicated Ellsberg for criminal violations that could have resulted in a 115-year prison sentence. But the charges were dismissed after revelations emerged that the government had illegally gathered evidence against Ellsberg, including breaking into his psychiatrist’s office to steal his file.

I’ve become better at detecting when Uncle Sam lies to me since I was a teenager. Some are easy to detect, like the second Bush administration’s claim that Iraqi dictator Saddam Hussein possessed weapons of mass destruction. President Bush used the lie to justify invading Iraq and overthrowing its government, but I suspected the real motivation was to grab control of its oil resources. Just as I thought, it quickly became clear that no weapons of mass destruction existed. Bush, naturally, said he was “shocked” none were found.

Some lies are more subtle. The Consumer Price Index, published monthly by the Bureau of Labor Statistics (BLS), is a textbook example. The agency defines the CPI “is a measure of the average change over time in the prices paid by urban consumers for a market basket of consumer goods and services.”

But I’ve become increasingly skeptical of how reliable a measurement of inflation the CPI really is. The prices I pay for food, health care and insurance, for instance, are increasing a lot faster than 2.3% per year. I suspect you’ve had similar experiences.

I’ve also rediscovered the work of economist John Williams and his superb website Shadowstats.com. It turns out that since 1980, the government has taken several steps to redefine how CPI is measured. The result, according to Williams, is that real inflation is much higher than the CPI indicates.

Here’s a chart from his website. Shockingly, it shows that if the CPI was measured today the same was as it was 40 years ago, the inflation rate would be around 10%, not 2%. 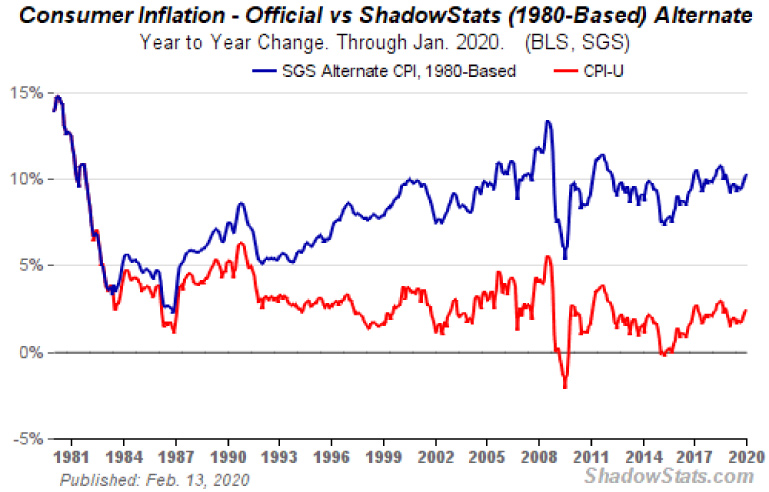 Admittedly, most economists don’t agree with Williams. Indeed, a lot of them argue that inflation is actually too low. They believe the Federal Reserve should lower interest rates to spur more inflation. Two weeks ago, the Fed did just that: a 0.5% interest rate cut to help the economy adjust to the impact of the coronavirus pandemic.

In the real world, inflation would be tracked by measuring the cost of buying a fixed basket of goods and services, roughly approximating the cost of maintaining a constant standard of living. And indeed, from the 1700s until around 1980, that’s how inflation was measured.

But beginning in the 1980s and accelerating through the 1990s, the BLS converted the CPI away from measuring the price changes in the fixed basket to changes in a basket where consumers could substitute lower-priced goods and services if higher-priced ones became too expensive. The theory was, in the words of then-Fed Chairman Alan Greenspan, “you’ll switch to something cheaper – more hamburger will show up in your meals than steak.”

The BLS also introduced a concept called “hedonic adjustment.” This theory holds that as the quality of goods or services improve, their effective cost decreases, even if consumers have no opportunity to buy those goods or services at a lower price. Thus, according to the official CPI, a television that cost $1,000 in 1996 should now cost $22.

Economists have a point when they say that the $1,000 television you purchase today is far superior to the one manufactured in 1996. And that’s true. But when was the last time you paid $22 for a television?

Here’s another example. The average cost of a new vehicle sold in 2019 was $37,183. That’s 30% higher than in 2009. But since there have been so many technological improvements in vehicles since 2009, the CPI shows only a 2% increase in vehicle prices in the last decade.

The politicians we sent to Washington, D.C. to represent us were only too happy to go along with these shenanigans, because it meant they didn’t need to make politically painful choices to cut entitlement programs like Social Security and Medicare. Indeed, Williams has calculated Social Security checks would be twice as large as they are today if not for the changes in calculating CPI in recent decades.

It’s the same political calculation Lyndon Johnson made in the 1960s: the American people can’t be trusted with the truth.

The long-term consequences of lying about a persistent real inflation rate of 10% or more are far more damaging than lying about a war. Thus, even though the official statistics might not show it, inflation is out of control in America. Each year, the real value of the cash in your bank account is worth about 10% less than it was the year before. Everyone who lives in the US must increase their income by 10% annually just to keep up or generate a consistent 10% or higher return on their savings.

And that’s before taxes – if you pay 40% of your income in taxes, that number jumps to nearly 17%. That’s 17% each year, just to keep up with the real inflation rate.  No conventional investment that can possibly keep up. And no business can afford to raise its prices 17% annually and hope to keep its customers.

There are no easy ways to cope with this reality. One suggestion for shielding your savings from inflation is to purchase real assets, especially gold. If you don’t have any savings, try to increase your income so that you can accumulate real assets.

The inflation lie also won’t end well. The US government now has a national debt approaching $23 trillion and at least an additional $200 trillion in unfunded obligations. There’s no way these obligations can ever be paid off; not even close. Lying about the inflation rate can delay the day of reckoning, but it can’t be postponed forever.

When it comes, it will start with a deflationary spiral (in at least the official CPI) that the Fed will sacrifice the dollar to stop, probably with negative interest rates of -5% or lower. A dollar collapse could lead to a hyperinflationary depression and the worst economic crisis anyone living today has ever experienced.

I recently wrote an Alert for members of our Nestmann Inner Circle on how this process will unfold, with additional suggestions on how to prepare for it. To learn more about this service, click here.

The clock is ticking; the time to prepare is now, before it’s too late.