The End of the United Kingdom Is Nothing to Fear

“The empire on which the sun never sets.”

That phrase was first attributed to a priest named Fray Francisco de Ugalde, uttered to King Charles I of Spain during the 16th century. It referred to the then-global extent of the Spanish Empire, which extended from the Philippines to most of what is now Mexico, Latin America, and South America.

In the 1560s, it might be the dead of night in Madrid, Spain’s capital. But in Manila or Mexico City, it would be broad daylight.

However, by the 18th century, the Spanish Empire was in serious decline. A new global contender for empire, Great Britain, had burst on the scene. Australia, Canada, Malaya, New Zealand, Singapore, the colonies comprising the original 13 American states, along with large chunks of India and Africa, all were once part of the British Empire. By the end of World War I, more than 450 million people lived under some measure of British control, amounting to about one-fifth of the world's population.

At its largest extent, the British Empire looked like this:

No wonder that in 1852, a minister named Alexander Campbell was said to remark, “The sun never sets on the British Empire.”

But thanks to the rise of nationalist movements throughout the British Empire and (especially) World Wars I and II, its power and influence gradually waned. The United States, Canada, Australia, New Zealand, and India all became independent. Today, the “empire” now called the United Kingdom is composed only of Britain (England, Scotland, and Wales), Northern Ireland, and a smattering of island territories. The total population is 94 million, comprising less than 1% of the world’s population. 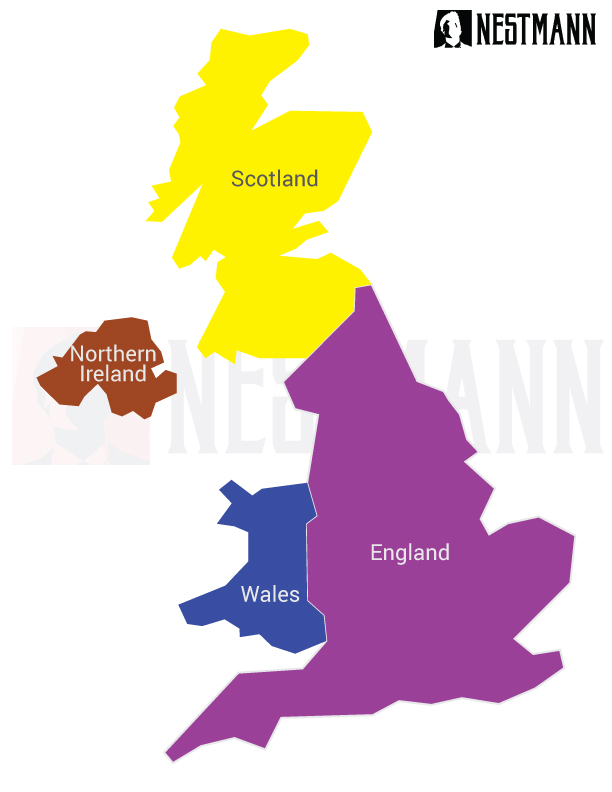 That background came to mind when I learned of the results of the December 12 election in the United Kingdom. The Conservative Party, led by Prime Minister Boris Johnson, won by a landslide. His campaign slogan was “Get Brexit Done,” referring to the referendum in June 2016 in which UK voters narrowly approved leaving the European Union.

It now seems inevitable that the UK will leave the EU, perhaps on quite messy terms. For instance, UK citizens might need visas to enter the newly configured EU, and vice-versa. Visas, tariffs, border security, and many more issues must be addressed if Johnson is to fulfill his promise of the UK leaving the EU by the December 2020 deadline.

But the prime minister has other issues to deal with as well; specifically, the dissolution of the UK itself.

In September 2014, voters in Scotland narrowly rejected a proposal to declare independence from the UK after a 307-year union. Two years later, Scotland voted by nearly a two-thirds majority to remain in the EU. But voters in much more populous England approved Brexit. That result re-energized separatists in Scotland in favor of independence.

The December 12 election results made Scotland’s aspirations for independence even clearer. Of the 59 seats Scotland holds in the UK Parliament, the Scottish National Party (SNP), which has long campaigned for Scottish independence, carried 48 of them. Its leader Nicola Sturgeon is now demanding another referendum on independence.

Meanwhile, in Northern Ireland, the December 12 election led to fears that Brexit will further isolate that region from the rest of the UK. Johnson has now announced that as part of the Brexit agreement, he will impose customs controls within the UK. People and goods moving from Northern Ireland to other parts of the UK will now need to deal with customs formalities and what Johnson’s Brexit secretary calls “targeted interventions” from border officials.

It’s no wonder why those in Northern Ireland who favor leaving the UK and reuniting this region with the Republic of Ireland call Brexit the “Betrayal Act.”

If the devolution of what was once the world’s largest empire in history continues to its logical conclusion, the United Kingdom will consist only of England and Wales, which comprises a total population of about 71 million people. The UK would also lose more than one-third of its geographical territory.

Of course, this is nothing new. Take a look at this map of Europe from 1914. Then, Austria was several times as big as it is today. Slovakia and the Czech Republic didn’t exist. What is now Turkey was the much larger Ottoman Empire. North Africa was occupied by France. Off the map, huge swaths of Africa and Asia were part of the British Empire. Alaska and Hawaii were still US territories, not states.

Nor is the process limited to the UK. The Spanish province of Catalonia wants to separate from Spain. Once an independent nation, Catalonia was fully absorbed into Spain in 1714. In 2017, voters in Catalonia voted overwhelmingly in favor of independence, but the results were rejected by the Spanish Parliament. Nine leaders of the independence campaign were imprisoned after being found guilty of sedition.

Italy has at least three secessionist movements: The Northern League and nationalist groups in both Venice and Sardinia. In 2014, nearly 90% of voters in the province of Venice voted for independence. The referendum was non-binding, but the vote will be impossible for Italy to ignore.

Outside Europe, Quebec has been threatening to secede from Canada for more than 50 years. A referendum for separation in 1995 lost by only 1%, and a large minority of “Quebecois” still seek independence.

The US has long been a hotbed of secessionist talk, even 150 years after the Civil War. Secessionist movements are active in Texas, Northern California, and numerous other states. Indeed, one researcher drew up a map of the US  if all 124 US secessionist movements through the end of 2011 had been successful. (My favorite is the state of “Reagan” with “Westylvania” and “Yazoo” as runners-up.)

Governments obviously don’t like secession movements because they would mean a loss of power. Small nations have smaller governments, smaller militaries, and can’t push around their neighbors as easily as big ones.

That’s probably why current and past secession movements in Iraq, Russia, Indonesia, and China have been brutally suppressed. That’s also the reason why, when the Southern US seceded from the North over 150 years ago, the North responded with overwhelming military force in a campaign that eventually cost both sides more than 500,000 lives. Politicians justified the war because of slavery, but few Americans were willing to fight a war over this issue.

What makes the residents of places like Catalonia, Scotland, and Texas so anxious to separate themselves from their respective national governments? Humans have a fundamental drive to seek personal autonomy, and that drive carries over into our social and political lives. And, of course, smaller governments are more accountable than larger ones.

Justifying secession is easier if the region that wants to secede feels unappreciated. For instance, the area surrounding Venice – Veneto – has long been one of Italy's wealthiest. Supporters of independence point out that Veneto receives only five euros in government services for every seven euros it pays in taxes. They claim that, with independence, Veneto would receive billions of euros annually in surplus revenue.

Naturally, new countries must compete economically, financially, and militarily. They need new sources of investment, skilled labor, and many other things to build their new nations.

Boris Johnson is likely to do everything legally possible (and perhaps beyond legally possible) to keep Scotland and Northern Ireland in the UK. But if he fails, and you’re looking for higher investment returns, the new nation of Scotland will likely offer higher interest rates on its sovereign debt than the UK currently does.

Looking for a business-friendly environment in which to set up your next venture? Scotland, if it’s smart, will roll out the red carpet to entrepreneurs.

For all these reasons, secession is nothing to fear. Indeed, for those of us seeking international opportunities, it’s something to look forward to.