The Case for Informed Consent in Vaccinations

We’re hesitant to wade into the already heavily debated vaccine conversation, if only because of the near-unbelievable enmity both pro-vaxxers and anti-vaxxers have for each another.

The topic seems especially relevant as COVID-19 vaccines are widely deployed. There is talk of “immunity passports,” where in the near future, it may not be possible to cross an international border without proof of vaccination. What’s more, if a government can force you to submit to a COVID-19 vaccination as a condition to travel, what prevents them from requiring proof of other vaccinations?

The Supreme Court declared in 1905 that public health authorities can compel you to vaccinate in order to fight the spread of a highly contagious and lethal disease. The Boston smallpox epidemic this case addressed had a mortality rate of 17%. Many survivors were left with the pockmarked skin and face characteristic of the disease. By comparison, COVID-19, with a mortality rate ranging from 0.28% to 1.4%, depending on how deaths are counted, isn’t remotely as severe.

The decision, however, pointedly didn’t create a blanket mandate for forced vaccinations. That was permissible only when “imminent danger” existed due to an “epidemic that imperiled an entire population.” And the court also warned against the potential abuse of power this authority gave public health authorities. As well, it established a medical exemption for patients whose immune systems were too weak to accept a vaccine. Absent a clear and present danger comparable to a smallpox epidemic, Americans had a legal right to refuse a vaccine.

But despite the court’s misgivings, vaccination mandates quickly spread throughout the country as the public health benefits in preventing the spread of diseases like smallpox, diphtheria, polio, and measles, seemed undeniable.

As a child, I was required to get six vaccinations in order to attend public school. My mother prepared this “immunization card” recording each dose. It shows a total of 14 vaccinations for six diseases starting three months after my birth. I never received vaccinations for measles and mumps because I had these diseases as a child and recovered. 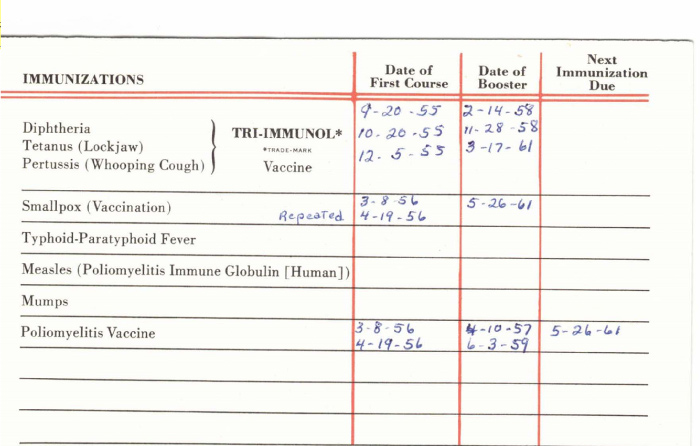 Six decades later, the CDC has a vaccination page on its website recommending a total of 33 vaccinations by age 12, plus flu shots annually. The first injection occurs only hours after a baby’s birth: their first dose of a three-shot regimen against hepatitis B.

It seems undeniable that society is better off if enough people have “herd immunity” to infectious diseases. But what are the costs of achieving it with mandatory vaccinations?

Anti-vaxxers claim one such consequence may be autism. Growing up, I didn’t know anyone with autism or displaying symptoms of it, such as flapping or spinning behaviors. Today, the CDC acknowledges that around 1 in 54 children have been diagnosed along the autism spectrum disorder. At the same time, they insist there is no link between vaccines and autism.

I’m not aware of any long-term health issue linked to a vaccine I received either as a child or adult. But, if I were the parent of a child facing the CDC’s imposing vaccination schedule, I would have some questions for the pediatrician. For instance, I would want to discuss the results of a study by the Children’s Health Defense. Using unpublished CDC data, the study shows a 7.6 times greater incidence of autism in children vaccinated for hepatitis B verses unvaccinated children.  And while Children’s Health Defense is widely discredited as being run by anti-vaxxers, I would also want the pediatrician to also address reports of neurological disorders associated with the hepatitis B vaccine compiled by the National Institutes of Health (NIH), including multiple sclerosis.

As well, I would want to better understand the likelihood of an unvaccinated child developing hepatitis B at all. After all, according to NIH research, those people at highest risk of the disease are the children of mothers with hepatitis B, along with “hemophiliacs, prisoners, gay men, injection drug users, sex workers, native Alaskans, and immigrants from sub-Saharan Africa, China, and southeast Asia.”

Yet after weighing the evidence as I understood it, I might consent to having my child vaccinated. Most states won’t allow a child not vaccinated for hepatitis B (and numerous other diseases) to enroll in public schools, private schools, or even day care facilities. And if an unvaccinated person acquires hepatitis B, there is no cure. Symptoms typically disappear after a few weeks, but some victims develop cirrhosis of the liver and may die without a transplant. What’s more, the disease is highly contagious, even without symptoms.

Moreover, even if there is a statistical link between hepatitis B vaccines and autism, correlation and causality are not the same thing. Many other factors could account for an increased risk of autism in vaccinated children. Research from the NIH suggests that environmental chemical factors (including vaccines) could be tied to autism. But the strongest links appear to come from certain volatile organic compounds such as methylene chloride, trichloroethylene, and styrene, along with phthalates – not vaccines.

Further, the likelihood of a severe reaction to any one vaccination is vanishingly small. While federal law prohibits suing vaccine manufacturers, in 1986, Congress created the Vaccine Injury Compensation Program (VICP) to provide a no-fault mechanism to compensate those allegedly harmed by a vaccination. Of every 800,000 vaccinations administered, one petition is filed alleging vaccine injury. But other studies have shown that fewer than 1% of adverse vaccination reactions are reported. That would raise the likelihood of some type of adverse reaction beyond temporary symptoms like pain or stiffness at the injection site to one in 8,000. That’s still a low probability, but nonetheless cause for concern over a regimen of 33 vaccinations (plus annual flu shots) by age 12.

Despite what appears to be a relatively low risk for health complications tied to vaccinations, we believe the case for “informed consent” – the right to refuse a medical procedure or treatment in light of evaluating the facts as you understand them – is unassailable. The most basic right we have in ourselves is that of self-ownership: individual sovereignty over our own bodies and lives. In the context of forced vaccination, the one exception would be in the face of an epidemic comparable in severity to one caused by smallpox.

A 2019 bill introduced in the Arizona legislature would have been a big step toward informed consent. It required physicians to discuss with parents the benefits and risks of each childhood vaccine they administer, give the parents a copy of the manufacturer’s package insert, and tell them how to report a vaccine-adverse event. The bill also expanded the list of exemptions for mandatory childhood vaccinations. Many physicians and mainstream medical organizations opposed the proposal as an extremist measure and that it would “send the wrong message.”

The wrong message, called “vaccine hesitancy,” is (according to the World Health Organization) one of the top ten global health threats. The question of vaccine hesitancy came to a head in 2019, when measles cases rose sharply in the United States, with the greatest concentrations by far found in unvaccinated children.

We encourage you to do your own research and discuss your concerns about vaccines with your physician before you (or your children) submit to any vaccination. A good start is an article from Dr. Jane Orient, who heads up the Association of American Physicians and Surgeons. You can retrieve it at this link. Dr. Orient has been branded a “conspiracy theorist,” but her article contains 67 footnotes, all of them worth following up on in your journey toward informed consent.