Negative Interest Rates and You

At the end of this past August, an astonishing $17 trillion in global debt had negative yields. About 30% of investment-grade bonds had yields below zero. If you bought these bonds and held them to maturity you were guaranteed to lose money.

Since then, the glut of bonds with negative yields has gone down by about $5 trillion. And that’s led to serious pain to anyone who bought them.

Interest rates throughout the world have been falling almost continuously since the 1980s. The first country to impose negative interest rates on a consistent basis was Sweden, which introduced a -0.25% rate on its “deposit interest rate” in 2009. The much larger European Central Bank (ECB), which sets monetary policy throughout the 19-country eurozone, followed suit in 2014 when it imposed a negative rate of -0.1%.

Negative interest rates were meant to be a temporary emergency measure to prop up moribund European economies. But they’re also a great way for cash-strapped governments to pay the bills.

Switzerland was the first nation to issue long-term bonds with a negative yield. Its 10-year April 2025 bond was yielding -1.1% in mid-August. It now yields -0.4%. If you bought the bonds in August and hold them to maturity, your annual yield would be -1.1%. You could always sell them now, but if you did, you’d experience a substantial capital loss.

It’s easy to gloat at how the market has penalized investors who purchased these bonds. Yet it’s important to realize that you probably have more exposure to them than you might think. I’ll explain why in a moment.

For most of us, the idea of accepting a small or even negative return on our investments is abhorrent. But bond speculators don’t care how low interest rates go, so long as they continue to fall. And the longer the duration of the bond, the more money they’ll make. This is because the longer a bond’s maturity, the more volatile its value when interest rates change.

An example is the Austrian 100-year government bond, which matures in September 2117. While this bond has a current yield of only 0.9%, its attraction to speculators is its duration. That’s because longer-term bonds are more sensitive to changes in interest rates than short-term bonds. In the case of the Austrian 100-year bond, its value changes by more than 70% for each 1% change in interest rates. So, while the bond was issued at a par value of 100, its value doubled within two years. A hedge fund operating with 5:1 leverage (i.e., with 80% borrowed money) which purchased this bond at par would have generated nearly a 500% profit.

However, the yield on this bond increased from 0.8% to 0.9% in the last few weeks. That meant the value of the bond decreased around 7%. It will take nearly eight years to make up the difference, unless long-term interest rates resume their fall. It would take a hedge fund purchasing this bond with 5:1 leverage 40 years to do so.

But there’s a larger threat that’s less apparent. A decade of ultra-low to negative interest rates has resulted in an unprecedented search for yield by well-heeled investors, hedge funds, insurance companies, and pension funds. Trillions of dollars have flowed into bond funds, many of them managed passively and tied to an index. If you own a life insurance policy, are entitled to a pension, or invest in bond funds, chances are you’re exposed to them.

Most of the time, the managers of index funds have an easy job; they merely need to buy the components of the index as money flows in. But what happens when index fund buyers start selling in droves? In that event, managers will have to do what they’ve promised: redeem investors’ holdings for cash. And they’ll need to sell in a hurry. This could turn into a vicious cycle where bonds must be liquidated at fire-sale prices, leading to catastrophic losses within days or even hours.

The danger of passive index funds is well-known but largely ignored. Occasionally, we get a reminder of what can happen when there’s a stampede out of an ETF. An example of this occurred in February 2018. At the time, there was great investor interest in the Chicago Board of Options Exchange Volatility Index (VIX). The VIX tends to spike in value during market selloffs, so it’s a popular way to profit in a financial crisis. Conversely, when markets are rising, the VIX decreases. Shorting the VIX can be very profitable in those times.

Thus, numerous ETFs were introduced to short the VIX. But in February 2018, during a market selloff, investor redemptions in funds that shorted the VIX led to a price meltdown in only a few days.

Here’s what happened to the value of ProShares Short VIX Short-Term Futures ETF (SVXY) during that period. 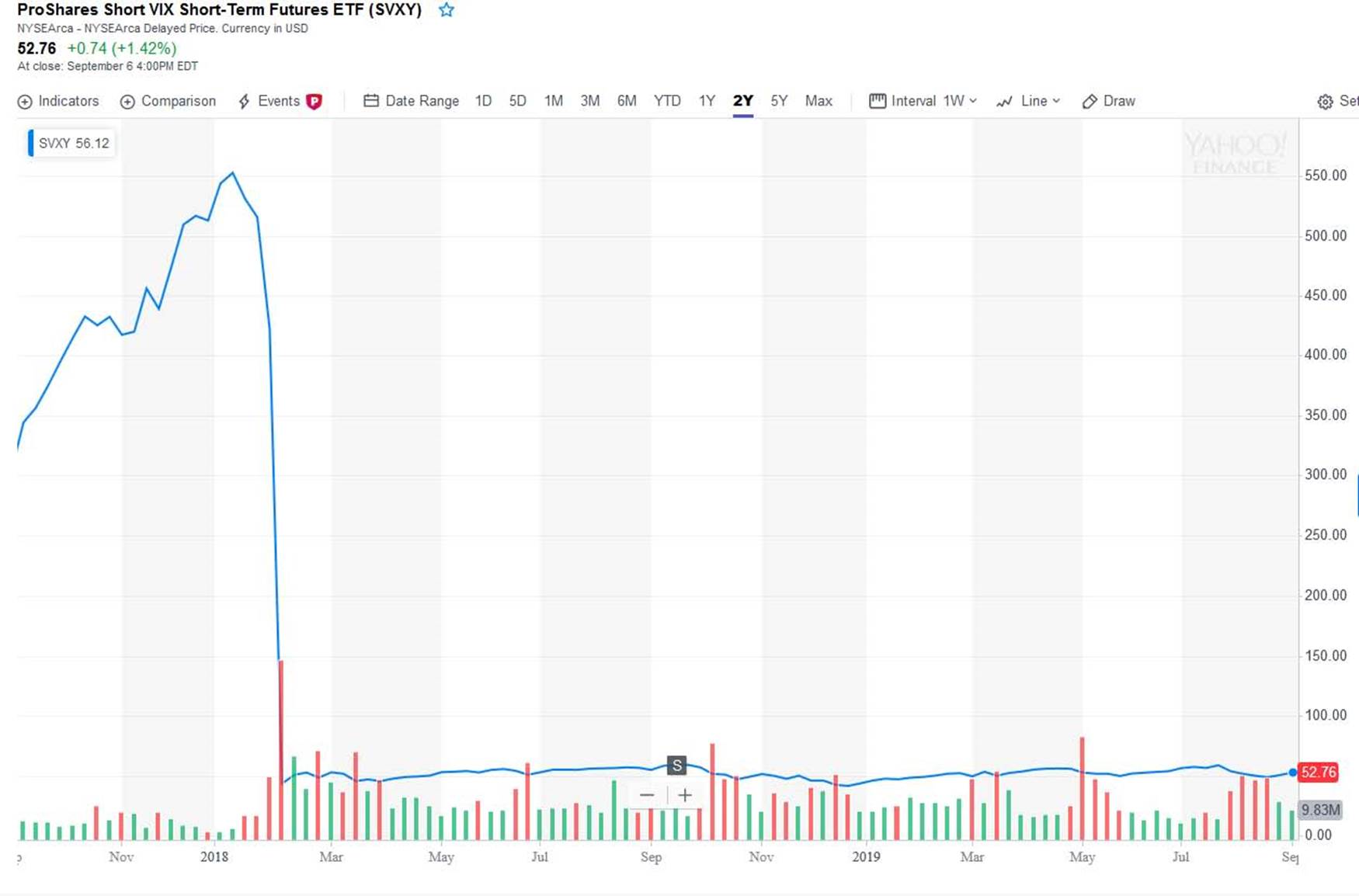 Other funds that shorted the VIX, such as the VelocityShares Daily Inverse VIX Short-Term Exchange-Traded Note (XIV) were forced to shut down. And while an indexed bond fund might fare better than SVXY or XIV did last year, we simply don’t know how far the values of bond ETFs would fall if investors stampede out of them.

But the closest approximation we have predicts a grim result. In September, a European regulator warned that 40% of European high-yield bond funds wouldn’t be able to meet even 10% of investor withdrawals in one week during a market shock.

Eventually, the gravy train will end. It must end because the biggest bond investors – hedge funds, insurance companies, and pension funds – won’t hold the bonds they own to maturity. If they do, the bonds will be redeemed at par value, and their premiums will evaporate. And the closer a bond gets to maturity, the lower the premium it trades at. The only way to lock in profits is to sell the bonds many years before they mature.

Who will buy them? Retail bond investors are an obvious candidate to be left holding the bag. But hedge funds are also counting on central banks to massively intervene with new rounds of quantitative easing if massive selling of bond portfolios depresses bond prices.

That’s the exit strategy. But it might not work. If bond prices fall quickly enough once the selling begins, yields could rise very quickly. As September’s European stress test demonstrated, only a small percentage of bond investors would realize their paper profits.

Given ultra-high leverage, inflated bond prices, and the enormous size of the bond market, a sell-off could quickly trigger a global crisis paralyzing the financial markets. Central banks could try to quell it, but there’s no guarantee they’ll succeed.

My larger concern is that a bear market in bonds could turn into a systemic financial collapse. This is the term economists use for the collapse of an entire financial system. In that event, a loss in the value of your portfolio will be the least of your concerns. A more pressing issue could be that someone else has a superior claim to the assets you thought you owned.

For instance, you don’t own the assets in your bank account. The bank does. You have only a debt claim on those assets. Your legal status becomes that of an unsecured creditor holding an IOU. If the bank fails, and deposit insurance doesn’t pay up, you’re left holding the bag.

The only way to defend yourself from systemic risk is to make sure your assets are held by the safest and most liquid brokers or banks and to use strategies that put you at the front of the creditor line if they do fail.

I discussed these strategies recently in a three-part series of articles I shared with members of our Nestmann Inner Circle (NIC). To try a risk-free subscription the NIC and learn more ways to protect yourself from the next financial crisis, click here.