Is this only for “tax cheats” and “moochers”?

Here’s a chart of expatriation trends since 1998, after a law took effect in 1996 requiring the IRS to publish this data quarterly in the Federal Register. 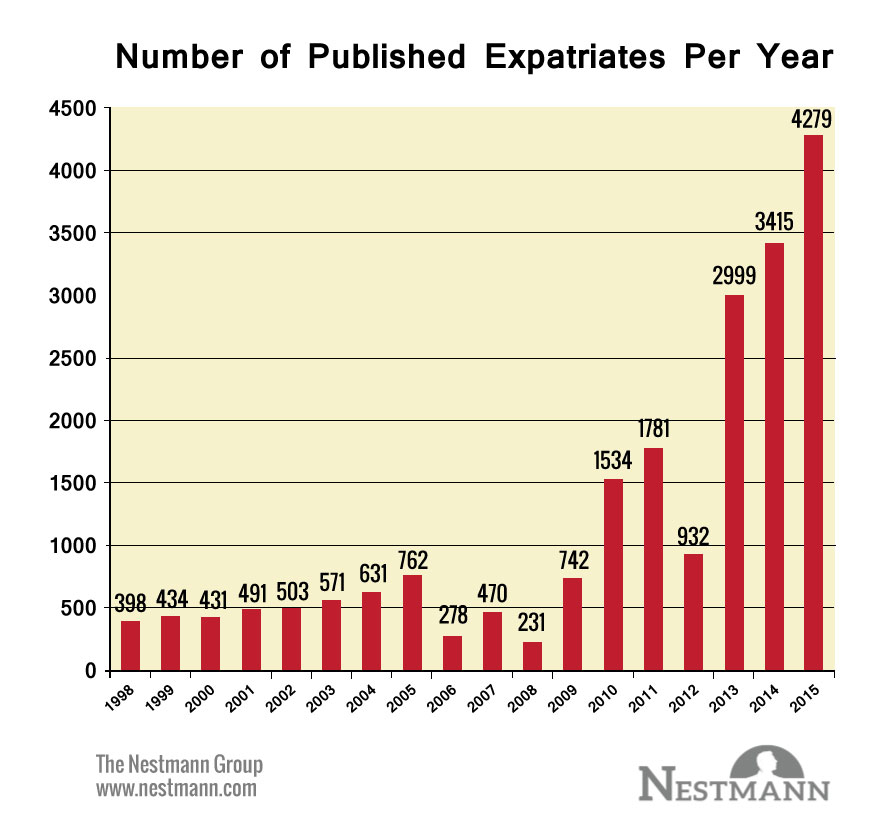 What could lead someone to take the admittedly radical step of severing official ties to Uncle Sam? The mainstream media report the culprit is tax. Tax is a factor, but hardly the only one. But it’s certainly a place to start.

US citizens and permanent residents must pay US tax on their worldwide income, even if they live permanently outside the country. The US is one of only two countries with this policy. The other is the one-party dictatorship of Eritrea. (Ironically, until 2013, the State Department’s annual report on human rights throughout the world condemned Eritrea for this policy.)

But worldwide taxes are just the beginning of problems facing US citizens or permanent residents living abroad. A case in point is the overwhelming compliance burden US taxpayers face. The information reporting regime they face is complex, overlapping, and constantly evolving. Even minor violations are subject to draconian penalties.

Take for instance, the onerous FinCEN Form 114, the “Report of Foreign Bank and Financial Accounts.” Fail to file this form and you could face a five- year prison term and a fine of $500,000 or more. True, sanctions typically are much less severe, but many other mandatory disclosure forms exist, all of them easy to miss, and all with significant penalties for non-compliance.

Don’t forget, too, that if you owe more than $50,000 in taxes or tax-related penalties, the State Department can revoke your passport. (For that reason, I expect another big surge in expatriations in 2016.)

Then there’s the issue of US laws such as the infamous FATCA, the Foreign Account Tax Compliance Act. These laws force foreign financial institutions to enforce US tax and reporting rules. In the case of FATCA, if these institutions fail to do so, they face a 30% withholding tax on many types of US source income and other capital transfers. In many cases, it’s easier to “fire” US clients than deal with this risk.

My own experience with expatriated clients backs this up.

The fact is, more than 8 million Americans now live abroad. Many of them can no longer hold bank accounts, qualify for a mortgage, or set up a tax-deferred account for retirement or their children’s education. Their only real option is to give up US citizenship, even though most of them don’t want to.

But don’t try telling Joe Six-Pack at a Donald Trump campaign rally that these folks are victims of unfair and oppressive government policies. Here are some of the comments posted on social media in response to the most recent announcement of expatriation statistics:

Is expatriation for you? Clearly, the decision to turn in your US passport or green card is an important one. It requires you to acquire a second passport, if you don’t already have one. It also requires that you live permanently outside the United States, if you don’t already. Further, if your net worth exceeds $2 million or your average income tax liability for the five years preceding your expatiation exceeds $161,000 or you can’t demonstrate tax compliance for those same five years, you might need to pay a stiff exit tax.

And finally, if Senators Bob Casey (D-PA) and Chuck Schumer (D-NY) have their way, such wealthy expatriates will be banned from ever returning to the United States. Congress didn’t get around to enacting this law the last four years, but you can count on its reintroduction. Expatriates don’t get a lot of sympathy on Capitol Hill – or on Main Street, USA.

If you've visited Nestmann.com recently, you might be wondering where last week's Nestmann's Notes issue went. No, you're not crazy… I asked our team to take it off our server once I realized that the information in it was misleading.

To recap, last week's Notes described a strategy to store certain gold coins in your IRA in your own home. Based on my review of the Tax Code, along with the analysis of a tax attorney, I believed this strategy would result in a "prohibited transaction" in an IRA. To put it bluntly, that would be a catastrophe for an IRA.

The reality is more nuanced, it turns out. Not long after the issue went out, I heard from a pensions attorney who informed me that while the IRS despises this strategy, it isn’t necessarily a prohibited transaction. That means if you're careful about it, you can likely store certain gold coins in your IRA at home or in a safe deposit box – in effect, acting as your own custodian. And if the IRS challenges this arrangement – and it could – you might prevail. But I still consider it a high-risk strategy and don’t recommend it.

I'm writing this because I think it's important to own up to one’s mistakes. I made one by pressing the send button too fast last week, and extend my apologies to you, my valued readers.