Expatriations are at an All-Time High, but Just Try to Get an Appointment…

Americans are giving up their citizenship faster than ever before – with 2,406 renunciations in the second quarter of 2020 alone.

However, US embassies were locked down tight for most of the second quarter due to the COVID-19 pandemic. So, the high numbers reported for 2020 (including 2,909 in the first quarter) are probably expatriations from 2019 that were only processed in 2020.

The highest annual total of expatriations for any full year came in 2016, when 5,411 Americans said goodbye to Uncle Sam. In just the first two quarters of 2020, however, 5,315 US citizens have turned in their passports. If present trends continue for 2020, the total for the year could exceed 10,000. 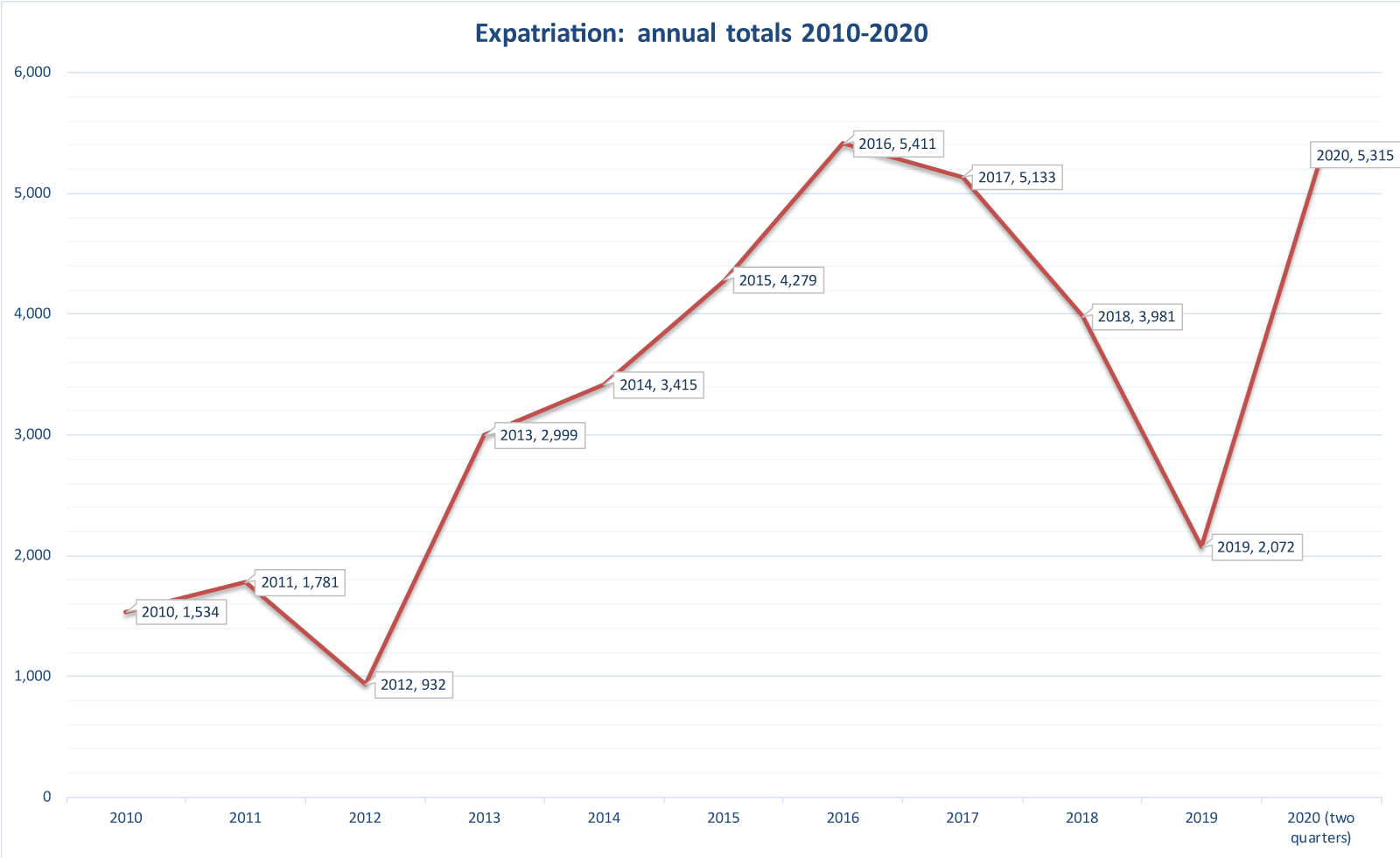 But that’s probably not going to happen. Our clients seeking to expatriate report that they can’t make an appointment to do so. This announcement from the US embassy in France sums up the reason why:

Due to COVID-19, [citizenship] renunciation services have been suspended worldwide until further notice. We apologize for the inconvenience.

Since the legal guidelines for expatriation require that you make a personal appearance with a consular official at a US embassy or consulate, it’s not possible to expatriate by mail. If you want to expatriate, you have to wait until “renunciation services” resume.

But that begs the question: why would someone want to give up their US citizenship?

Actually, there are at least seven reasons, as I describe in this article. It mainly boils down to the US being one of only two nations that impose income tax on its citizens’ worldwide income, even if they live in another country. (Eritrea, a totalitarian dictatorship, is the other one.)

Complying with US tax rules is hard enough even when you live here. But if you’re one of the nine million or so Americans residing in another country, you must file two sets of tax forms each year.

Plus, laws like the infamous Foreign Account Tax Compliance Act (FATCA) have made it nearly impossible for Americans living abroad to carry on the most basic financial and business relationships in their adopted countries.

Consider the example of Patricia (not her real name), a US citizen who has spent most of her life in Canada  – probably the most popular destination for Americans living abroad. Since beginning her working career in Canada, Patricia has filed two sets of tax returns each year. She pays an average of $3,500 annually to file her US tax documents. Since Canadian taxes are generally higher than US taxes, she rarely has experienced a US tax liability.

Patricia owns a small business with $2 million in retained earnings. To operate it in the most tax-advantaged way possible, she created a Canadian Controlled Private Corporation (CCPC) to hold it. This entity is eligible for an effective Canadian federal tax rate of 9% on the first C$500,000 of annual business income.

Provincial tax can add as much as 4% to this total, for a top rate of 13%. Investment income in a CCPC is taxed at a top rate of 54%, but capital gains and dividends from Canadian sources are taxed at only half the top rate (27%).

Once Patricia starts taking distributions from her CCPC, she’ll pay additional tax at a top combined federal and provincial rate of 53.3%, although the first CAD $883,384 in capital gains is eligible for the lifetime capital gains exemption. Her total Canadian tax liability could be as high as 66.3%; even more if the CCPC was previously taxed on its investment income.

Does Patricia sound like a tax evader to you?

The US Congress thinks she is. When its Tax Cuts and Jobs Act came into effect in 2018, the law subjected the retained earnings of controlled foreign corporations (CFCs) owned by US persons to a “repatriation tax.” The undistributed earnings in Patricia’s PLLC will be taxed at a 17.5% rate, for a total tax of $350,000. And to add insult to injury, these earnings will be taxed a second time when Patricia actually distributes them to herself in Canada. The only saving grace is that the new law gives Patricia eight years to pay the $350,000 tax.

Now, it’s too late at this point for Patricia to do anything to prevent this result. She’s screwed, especially since the Canadian government has consistently refused to intervene to prevent the IRS from enforcing sanctions against dual US-Canadian citizens living in Canada.

In the meantime, the IRS has announced a compliance initiative to pursue sanctions against “scofflaws” like Patricia.

Now multiply Patricia’s problems by nine million (although, of course, not all Americans living overseas own foreign corporations). Not to mention the impossibility of maintaining normal banking relationships, the inability to own most mutual funds without punitive tax consequences, and the impracticality of even enrolling in a pension scheme.

With all these obstacles to living a normal life overseas, you can understand why so many Americans living abroad are heading for the exits. But a 2008 law imposes an “exit tax” on unrealized gains held in the worldwide estates of US citizens or long-term residents who expatriate. And again, there’s no assurance that the country you live in won’t impose tax a second time on the same gains when you sell appreciated assets after expatriation. There are numerous other tax booby traps that can apply as well. And while it’s possible to mitigate these results, avoiding the traps again requires expert (and expensive) advice.

If the Democrats take control of both houses of Congress this year, it will probably get worse for US citizens who expatriate. For instance, you can count on a revival of the proposal from Senators Bob Casey (D-PA) and Chuck Schumer (D-NY) which would ban wealthy expatriates from ever returning to the US, even as a visitor.

Is expatriation for you? The decision to give up US citizenship is a serious one. It requires that you acquire a second passport if you don’t already have one. You must also live permanently outside the US if you don’t already. And you need to be psychologically prepared to be banned forever from re-entering the country.

But expatriation is the only way that US citizens living abroad can legally and permanently eliminate US tax and reporting obligations on their non-US income, wherever they live. It's a tax avoidance option that Congress may eventually make even more onerous.

That’s assuming, of course, you can even book an appointment.