In the early 1990s, former Federal Reserve Chairman Alan Greenspan reportedly said something to the effect that when inflation rises, “you’ll switch to something cheaper—more hamburger will show up in your meals than steak.”

Greenspan made that argument in defense of what became known as “hedonic adjustments” in the Consumer Price Index (CPI). This theory holds that as the quality of goods or services improve, their effective cost decreases, even if consumers have no opportunity to buy those goods or services at a lower price. We’ve written about the impact of hedonic adjustments understating actual price increases. For instance according to the official CPI, a television that cost $1,000 in 1996 should now cost $22.

If inflation today were measured the way it was in 1982, it would be about 16% annually; double the official rate. 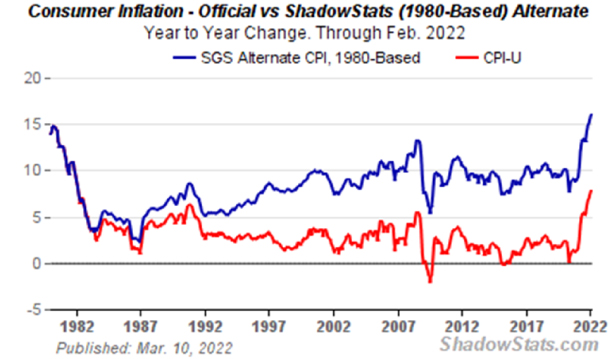 There’s a dirty little secret about inflation you’re not supposed to know. But we’re going to tell you anyway.

Inflation this bad isn’t just unpleasant, it can literally break a civilization. This is because it makes it impossible for a person who relies on their labor to generate income to keep up with rising prices. Wages almost never keep up with inflation.

Another reason is that inflation forces people to become greedy. It’s like the behavior of a group of hungry teenagers at a dinner party. Many of them take more than they can eat because they’re afraid the food will run out. It’s every person for themselves. Society be damned. That behavior magnified across an entire society leads to shortages, a phenomenon Americans under the age of 40 have never experienced personally.

Inflation also leads to policies that ensure further inflation. For instance, as inflation ravages wage-earners’ purchasing power, political pressure builds for initiatives such as a “universal basic income” or a “living wage” – policies that themselves lead to higher inflation.

What people should really fight for is a return to sound money, which would end inflation altogether. Indeed, in an economy underpinned with gold or another commodity standard, deflation, not inflation, would be the norm.

Inflation also drives political polarization. For instance, it’s easy to blame rich people for inflation, because they’re the ones who benefit from it the most. They can buy or already own productive assets whose yields rise with inflation. Their purchasing power is not affected like it is for wage-earners with no significant savings.

This doesn’t go down well with liberals like Elizabeth Warren. She blames inflation on “greedy corporations” and has proposed both higher corporate taxes and an “ultra-millionaire’s tax” on the wealthiest Americans.

What’s ironic is that the very policies Warren and her kindred spirits embrace are the ones that are especially conducive to inflation, which got us into this vicious circle to begin with.

Take a once arcane concept called “modern monetary theory” (MMT). The idea is that governments can simply print money to pay for their financial obligations.

What’s not to like? After all, since the world abandoned all semblance of the gold standard in 1971, any government can literally create as much money as it wants. And any government that issues its own currency can always pay its bills with the money it creates.

The fatal flaw in MMT is inflation. That’s because inflation is a monetary phenomenon. An increase in the money supply – such as creating trillions of dollars out of thin air – doesn’t directly increase consumer prices. Instead, at least initially, it creates asset bubbles, such as the explosive rise in stock prices or real estate. Only later does inflation “trickle down” to affect wage earners. This is the real trickledown economics.

But there’s an additional ingredient now throwing fuel on the inflationary fire: supply chain disruptions. While all sorts of goods experience supply chain issues, we’ll focus on just one: oil.

Here’s a chart of oil prices for the last eight years. 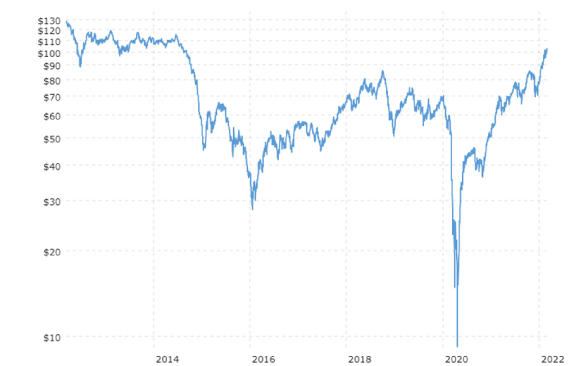 You’ll note that we’re experiencing the highest oil prices since 2014. The reason, of course, is that oil traders anticipated supply chain disruptions as a result of the Russia-Ukraine war. And they were right.

What’s more, the decision by the United States and other Western nations to ban imports of oil from Russia will only add fuel to the fire.

Rising energy costs increase the cost of virtually all types of goods, because they all require energy to produce. It’s obvious that a company producing refrigerators at a factory might want to charge more for those refrigerators because its energy – and thus production costs are increasing.

And here’s another dirty little secret you’re not supposed to know. The Federal Reserve, our nation’s central bank and the entity responsible for taming inflation, is operating with its hands tied behind its back.

Hiking interest rates is the core tool a central bank uses to fight inflation and protect its country’s currency from devaluation. It’s a harsh remedy, as anyone older than 50 remembers from the 1980s, when the Fed raised short-term rates to a nosebleed-high of 20%, twice in two years.

But no matter how bad inflation gets – even as bad as the 14% it hit in 1980 – the Fed can never raise interest rates anywhere close to 20%. The reason is that Uncle Sam has a $30 trillion noose around its neck.

Higher interest rates don’t just mean that you’ll pay more on your mortgage or receive higher yields in your money market account. It also means the Treasury pays more in interest on the $30 trillion national debt. With an average debt maturity of just over five years, a mere 1% increase in interest rates would add nearly $60 billion to the deficit the first year it was imposed, ballooning to $300 billion annually (1% of $30 trillion) by year five. A 3% increase across the board would eventually cost the Treasury an additional $900 billion per year. In reality, the numbers would be even higher since the national debt is increasing by trillions of dollars annually.

What can you do to protect yourself? The obvious answer is to do what the wealthy do: buy productive assets that keep up with inflation. Or passive assets such as gold that are traditional inflation hedges.

But accumulating productive assets and gold won’t be enough. As inflation splinters societies, it’s also important to build personal resiliency. For instance, if you have extra storage space in your home, we endorse the strategy of stockpiling real goods. Stockpiling is also a powerful inflation hedge, making this strategy more relevant than ever as prices surge.

Finally, as civilization breaks down, you’ll want to look at ways of “getting out of Dodge,” if necessary. The ultimate tool for doing so is a second citizenship and passport, or at least legal residence in another country.

That’s one of our specialties, and if you’d like more information on how we can assist you in acquiring second citizenship, email us at service@nestmann.com and a member of our team will be in touch.