Can the Fed’s Trillion-Dollar Deficits Prop Up the Economy Forever?

Back on April 7, I predicted that the economic downturn spurred by COVID-19 lockdowns would be as bad or worse than the Great Depression of the 1930s.

So far, that scenario hasn’t happened. Stock prices have soared since that article was published, with the S&P 500 up more than 20%.

And plenty of investment analysts that think the bull market has a long way to go. Chris Harvey, head of equity strategy at Wells Fargo Securities, predicts a “melt-up” in the stock market over the rest of summer and into fall. Articles are being published promoting the idea that you might want to quit your job to trade stocks.

But as I pointed out in my original article, COVID-19 lockdowns have caused unprecedented economic damage that hasn’t fully bubbled to the surface due to our country’s near-instant transition to socialism with the government essentially running the economy.

Another factor propping up the markets is a psychological characteristic called “normalcy bias.” This term refers to our tendency to expect that the future will be roughly similar to our past experiences. Thus, when a shock like COVID-19 arrives, we tend to believe that things will return to “normalcy” relatively quickly, unless we’re directly affected by the shock.

The mainstream media contributes to normalcy bias by deliberately manipulating the news to make economic conditions appear more favorable than they really are. A textbook example occurred on July 2 when the Labor Department announced its latest unemployment statistics.

According to the Department of Labor’s Bureau of Labor Statistics, total nonfarm payroll employment rose by 4.8 million people in June, and the unemployment rate declined from 14.7% to 11.1%. Meanwhile, the total number of unemployed Americans fell by 3.2 million to 17.8 million.

What the media didn’t report, though, was that on the same day – July 2 – the Department of Labor published another set of statistics that weren’t nearly as well-publicized. That report showed that the total number of Americans receiving state and federal unemployment benefits as of June 13 stood at 31.5 million (scroll to end of the report for the unadjusted number).

There are about 161 million workers in the civilian labor force in the US. If 31.5 million of them are collecting unemployment, that equates to an unemployment rate of 19.5%.

And it’s actually a bit worse than even that number. As of July 18, the total number of Americans collecting some form of unemployment benefits rose to 31.8 million. That brings the real unemployment rate to 19.8%.

That’s a heck of a lot worse than 11.1%. And it’s within spitting distance of the 25.6% unemployment rate in 1933, at the worst point in the Great Depression.

But our normalcy bias doesn’t want to consider the implications of these numbers. And that bias is reinforced by the actions of our government. For instance, the Federal Reserve has since late February embarked on what’s been dubbed an “everything bailout.” It’s bought up trillions of dollars of dodgy assets with money it created out of thin air to place on its balance sheet. Indeed, on March 23, the Fed announced infinite quantitative easing (QE). 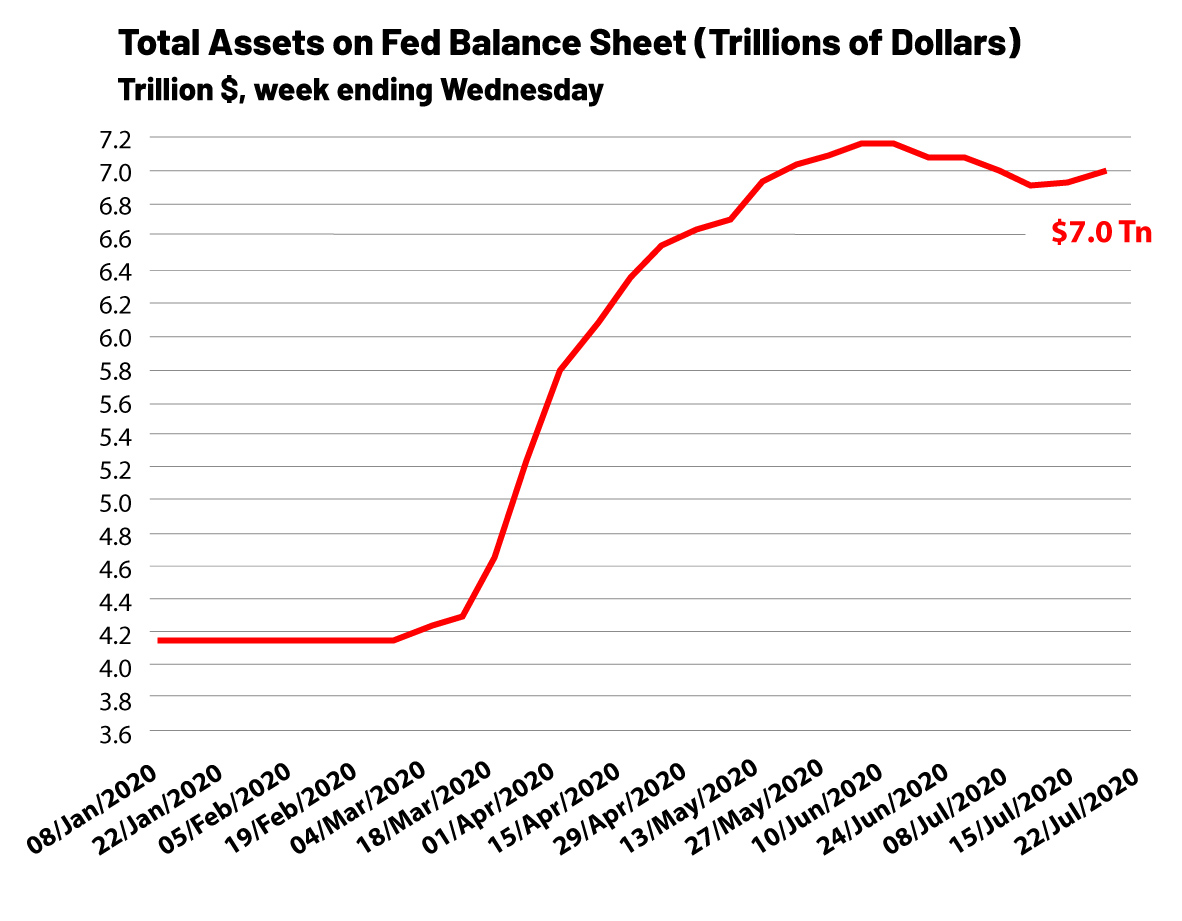 Meanwhile, Congress has done its part to reinforce normalcy bias. It’s been sending $600 weekly checks to unemployed Americans – payments scheduled to end this week, but that will likely be resumed. What’s more, the $2 trillion bailout package it enacted at the end of March authorized the Treasury to send every working American a check up to $1,200.

These measures caused the federal budget deficit to reach a record $864 billion in June. That’s more than the deficit for all of 2019. If Congress approves another bailout package in August, the budget deficit for the current fiscal year ending September 30 could easily exceed $4 trillion. The total federal debt is now approaching $27 trillion.

Our normalcy bias reassures us that “deficits don’t matter.” And the stock market certainly reinforces that belief. But there are some storm clouds on the horizon.

One cloud is the value of the dollar. It’s slid to an 18-month-low as the Fed and Congress open the fiscal floodgates. The dollar’s value has dropped 5% in the last three months alone.

Meanwhile, the prices of precious metals are soaring. Gold prices have risen nearly 20% since the beginning of 2020 and have now exceeded all-time highs. Silver prices have risen even faster, clocking in more than a 25% gain since 2019 ended.

Thus, we are seeing early warning signs that the Fed and Congress can’t prop up the economy forever. Because, if they keep on the same path they’re on now, the result will be the utter destruction of the dollar.

Since the Fed’s creation in 1913, the value of the dollar measured in gold, has declined by nearly 99%. And it could go a lot lower if the Fed and Congress continue down this primrose path.

How far could the dollar fall? One way to estimate the dollar’s true value is to estimate how high the price of gold would reach if America were to return to a gold standard. While this is hardly imminent, it could occur if America’s creditors were to force monetary reform.

For instance, we could divide the amount of gold held by the Treasury by the total federal debt. America’s official gold reserves come to 261,498,926.2 troy ounces. Dividing the total federal debt of $26.55 trillion by this number of ounces results in an implied gold price of $101,530/ounce.

That would amount to a further 98% devaluation of the dollar from its current value. And it would mean that prices would instantaneously climb by 50 times or more.

Of course, the federal government will never voluntarily return to a gold standard. Instead, it will first resort to coercive measures such as bail-ins, negative interest rates, and cash recalls.

Again, our normalcy bias doesn’t want to admit such things are possible. But they are, and the history of every currency on earth proves it. They all eventually fail.

So, while stock prices keep rising, Congress keeps spending, and while unemployment numbers appear to be falling, all is not well with our economy. There will be a reckoning.