Are You Ready to Become an “Economic Benedict Arnold”?

Every quarter, Uncle Sam publishes what’s come to be known in the offshore business as the “name and shame” list.

This list, published in the Federal Register, consists of the names of former US citizens who have “chosen to expatriate.” In other words, these individuals have given up their US citizenship and passport. They’ve also relinquished their right to live and work in the United States, and potentially, to even make temporary visits.

The name and shame list was first proposed in 1995 by a Florida congressman named Sam Gibbons, who was fond of referring to expatriating Americans as “economic Benedict Arnolds.” His idea was that a published list of individuals who had made what was then (and still is) viewed as the frankly treasonous decision to turn in their US citizenship and passport might serve as a disincentive for those considering that step. Gibbons, along with many of his colleagues, believed (falsely) that the only reason Americans gave up their citizenship was to avoid paying tax.

Indeed, the trend of expatriation has fallen sharply in recent years, as this chart from tax attorney Andrew Mitchell demonstrates: 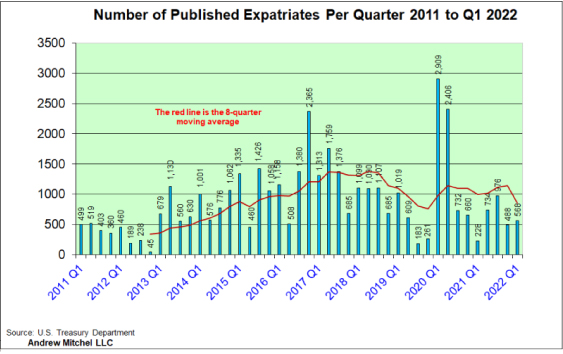 There’s considerable evidence, though, that a far larger number of Americans want to expatriate than these numbers might indicate. So why haven’t they?

One reason is that in order to expatriate, you need to make a personal appearance before a consular official at a US embassy. And these appointments are very hard to book. Most US embassies were locked down while the COVID pandemic was raging.

Another reason the number of expatriations has declined could be the cost. The fee to have the State Department process an expatriation case is $2,350. That’s the highest fee imposed by any country.

And there are a number of tax traps to avoid or at least attempt to mitigate before you make your appointment. That’s especially true if your net worth is greater than $2 million, or you otherwise qualify as a “covered expatriate.”

But perhaps we’re getting a bit ahead of ourselves. Why might you even consider becoming, in Congressman Gibbons’ words, an “economic Benedict Arnold”?

To begin with, for Americans living in the United States, expatriation is mostly a non-starter. It’s not worth considering unless you already have a second citizenship and you’re comfortable with the idea of living abroad full-time in another country. And even if you do live full-time outside the United States, if most of your income comes from US sources, you’re probably better off tax-wise remaining a US citizen. For instance, if you decide to retire in Panama and your primary sources of income are from Social Security and a state pension, you’d actually pay thousands of dollars in additional federal tax each year if you expatriate.

But for millions of US citizens living and working overseas, their nationality is actually a seven-times lose dilemma, as we described in this article from 2020.

It mainly boils down to the “land of the free” being one of only two nations that impose income tax on its citizens’ worldwide income, even if they live full-time in another country. (Eritrea, a totalitarian dictatorship, is the other one.)

Complying with US tax rules is hard enough even when you live here. But if you’re one of the nine million or so Americans residing in another country, you must file two sets of tax forms each year.

Plus, laws like the infamous Foreign Account Tax Compliance Act (FATCA) have made it nearly impossible for Americans living abroad to carry on the most basic financial and business relationships in their adopted countries.

And it’s about to get worse. A new report from the Treasury Inspector General for Tax Administration (TIGTA) suggests that the IRS needs to dramatically ramp up FACTA enforcement. Essentially, TIGTA has concluded that revenues from FATCA haven’t come close to what proponents of the law had suggested it would bring in.

A report published by the Congressional Joint Committee on Taxation when FATCA came into effect in 2010 estimated that the law would bring in $8.7 billion in revenue by 2020. The actual amount raised, according to TIGTA’s report, was only $1.5 billion in withholding taxes and $14 million in penalties. And to generate that relatively paltry sum, the report concludes the IRS has spent $574 million.

TIGTA makes six suggestions for additional compliance efforts, which mainly involve assessing more penalties for non-compliance with the law. That means US citizens living (and especially working) abroad can anticipate even more interference with their ability to carry on several basic aspects of daily life, including opening bank accounts, borrowing money, or participating in a pension plan. And in response, as more US embassies and consulates reopen for expatriation appointments, we can anticipate the number of economic Benedict Arnolds will increase sharply in the months and years ahead.

Is expatriation for you? The decision to give up US citizenship is a serious one. It requires that you acquire a second citizenship and passport if you don’t already have one. You must also live permanently outside the United States if you don’t already. And as we already mentioned, there can be very unpleasant tax consequences.

That’s assuming, of course, you can even book an appointment.