Our planet’s climate has been changing for billions of years. And it will continue for billions more, until our sun becomes a “Red Giant,” devouring the inner planets in the Solar System, including ours.

Planet Earth formed roughly 4.5 billion years ago. At its hottest, our world was a ball of molten gas incapable of supporting life. At its coolest, around 700 million years ago, it was quite literally a ball of ice.

One of the factors contributing to global climate change is the concentration of greenhouse gases in the atmosphere. Among the most common greenhouse gases are water vapor (H2O), carbon dioxide (CO2), and methane (CH4).

Humans haven’t been around for more than 99.9% of the earth’s history. Indeed, until about 250 years ago, our own contribution to greenhouse gases was negligible. But starting around 1750, the concentration of CO2 (the most common greenhouse gas) in our atmosphere began to increase rapidly, from 280 parts per million (ppm) to more than 400 ppm today. Indeed, the atmospheric CO2 concentration is at the highest level in more than 800,000 years.

The cause of the rapid increase in CO2 over the last two centuries is hotly debated, but the scientific consensus is that much of it is caused by human activity. Intuitively, this makes sense because the CO2 spike started to develop in 1750, near the beginning of the industrial revolution.

Scientists predict that global temperatures will rise as a result of the sharply increased levels of CO2. The graph below overlays the historical atmospheric concentration of CO2 atmospheric temperatures for at least the last 800,000 years. 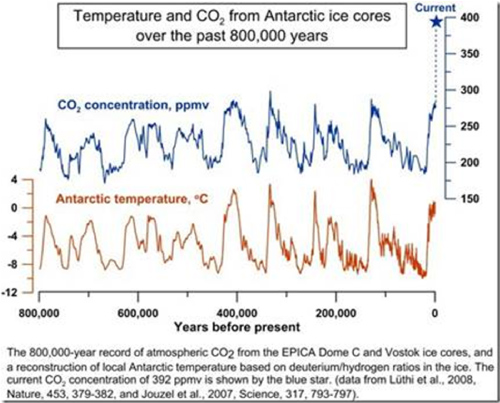 Unfortunately, small increases in temperature can be hard to measure over short periods, because they can be masked by natural variation. As well, other factors can influence global temperatures, such as variations in solar output and the earth’s orbit.

Still, the five warmest years on our planet since reliable records started being made around 1880 have occurred in the last five years – 2015-2019. Nineteen of the last 20 hottest years have occurred since 2000. Based on in part on this apparent correlation between atmospheric CO2 concentrations and global temperatures, scientists predict global sea levels could rise by up to three feet by 2100. This will exacerbate the damaging effects of high tides and storm surges in coastal areas, and many of the world’s largest cities will experience almost continuous flood conditions.

Several factors could slow or reverse climate change. These include:

There’s also the uncomfortable fact that climate change has human victims, and most of them are poor. Coastal populations in Southeast Asia are especially vulnerable to rising sea levels, for instance.

But while it’s ethically impossible to ignore that human dimension, do you or anyone else have the “right” to particular climatic conditions?

I think not. If rising sea levels force you to move inland, it’s unfortunate, but also isn’t a violation of your rights.

It would be different if I built a dam that flooded your neighborhood, forcing you to flee. In that case, you’ve been wronged, and I should pay you compensation.

Fortunately, there are many ways the free market can be harnessed to combat climate change without assuming that anyone has the right to a climate they believe is more desirable.

One example is deforestation, one of the main contributors to the increase in greenhouse gas emissions. Yet in countries with strong free-market tradition, like the US, the forest cover is actually higher than it was a century ago. One major reason is that most forests in the US are privately owned. Property owners have an incentive to keep their land forested to ensure profits. If other countries followed this example, deforestation would slow dramatically.

Another way Americans can fight climate change is to eliminate the enormous subsidies the federal government pays to the fossil fuel industry. These incentives cost US taxpayers $20 billion or more annually and include the intangible drilling cost deduction, the oil depletion allowance, and various tax credits to encourage coal consumption.

These subsidies are especially unjustified now that renewable energy sources like wind and solar are already the least expensive forms of power generation in two-thirds of the world, including large parts of the US. And prices for these technologies continue to fall fast. Indeed, the price of solar-generated electricity is predicted to drop another 40% in 2020. As well, the cost of storing energy produced by renewables in batteries has fallen by nearly 90% since 2010.

When large-scale energy production is required in an industrial or urban area, it’s hard to beat nuclear power, which doesn’t produce greenhouse gases. The latest generation of nuclear reactors developed by energy entrepreneurs are 1/100 the size of current models and can be installed in clusters close to factories and cities, rather than miles away. Because they’re so small, they’re much easier to encase securely. They also can’t melt down.

Thus, even though climate change may be an existential threat to humanity, solutions are available that don’t require massive top-to-bottom market interventions. But don’t try telling that to organizations such as Extinction Rebellion, which demands that governments mandate zero net greenhouse emissions by 2025.

The only way for the world to achieve that goal would be to revert to a pre-industrial existence. In the net-zero economy of 2025, there would be no vehicles (although electric cars and trucks might be okay if they’re charged with renewable energy). No air travel. No heating or cooling of our homes or offices with fossil fuels. No manufacturing of any product requiring fossil fuel use. No new construction. And presumably, these requirements would be enforced by a swarm of armed bureaucrats fanning out across the globe.

The result would be a total collapse of the global economy. Some of us would survive if we had the skills our great-grandparents had, but even they used fossil fuels – primarily wood – to heat their homes. Without those skills, which have largely been lost, the solutions organizations like Extinction Rebellion demand would, ironically, lead to billions of human deaths.

Of course, it’s politically untenable for any society to voluntarily embrace what would instantly become a dystopian nightmare. So while proposals like net-zero 2025 might slow rising sea levels in theory, they’ll never become a reality.

Instead, we’ll muddle through. Humans won’t become extinct, at least not from climate change alone. Before we acquiesce to top-down demands that we radically reduce our standard of living to fight climate change, we should first unleash the free market.